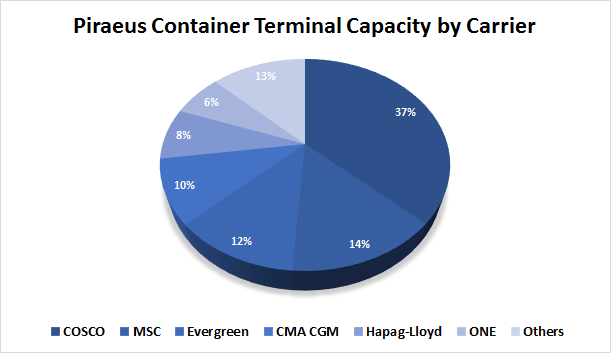 Cosco Expands in the Mediterranean with the Port of Piraeus

The Piraeus Container Terminal in Greece’s primary port is owned and operated by COSCO who controls 37 percent of the terminal’s capacity. COSCO’s investment has boosted Piraeus to become the second largest port in the Mediterranean and is on track to become the largest in the region. China, via COSCO, is preparing Piraeus to be an integral part of their Belt and Road initiative due to Piraeus being the closest major EU port after passing the Suez.
COSCO’s dominance in the port is shown using BlueWater Reporting’s Terminal Analysis application. The application compares the allocated TEUs of each carrier that call the Piraeus Container Terminal. The pie chart shows that COSCO’s share of the capacity (466,217 TEUs or 37%) is almost three times the share of the next largest carrier, MSC (181,171 TEUs or 14%), and well over one-third of the total (1,265,506 TEUs).
As of April 3, COSCO’s initiative may be halted due to a decision made by the Central Archaeological Council (KAS) in Athens to designate a large chunk of Piraeus as an area of archeological interest. This is intended to halt the 600-million-euro plan to improve railway connections and build new tourist amenities adjacent to the port. Time will tell if this decision will stifle the progress Piraeus has seen under COSCO’s ownership or if the port will stay on track to become the top port of the Mediterranean.