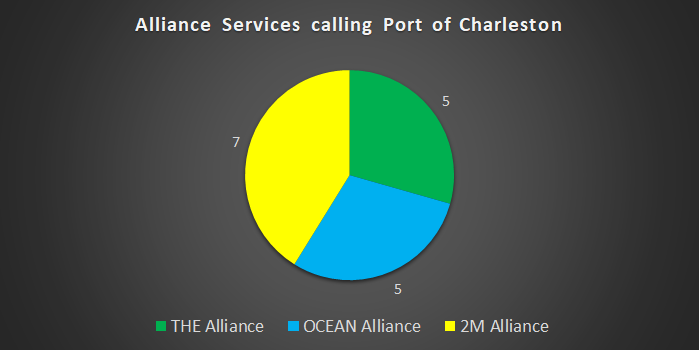 This past year, the South Carolina Ports Authority said it had its best calendar year ever, having handled 2.44 million TEUs, which was a 5% increase from 2018.
“S.C. Ports Authority President and CEO Jim Newsome said volumes were strong across business segments in 2019, despite global trade issues,” according to press release issued by S.C. Ports Authority.
The port authority has been benefitting from substantially better inland connectivity, between opening Inland Port Greer in 2013 and Inland Port Dillon in 2018, while upgrades continue at the Wando Welch Terminal.
Additionally, the port authority has strong backing from the three major ocean carrier alliances. THE Alliance and the OCEAN Alliance each have five services calling the Port of Charleston, and the 2M Alliance has seven services calling the Port of Charleston, as illustrated in the chart above, which was built using BlueWater Reporting’s Port Dashboard tool.
It appears increased volumes can be expected going forward, due to major expansion projects underway.
“In 2021, S.C. Ports will open the first phase of the Hugh K. Leatherman Sr. Terminal and achieve a 52-foot depth in Charleston Harbor,” Newsome said.
Interested in our data? Contact sales here for more information.