The Asia-India Subcontinent (ISC) trade saw container capacity sink in 2019 amid a decline in merchandise trade between China and the ISC, although there is a good chance this trend could reverse thanks to China attempting to strengthen its trade relationships with key economies in the ISC.
China and India, which dominate the Asia-ISC trade, both appear eager to strengthen their trade ties and have agreed that improvements need to be made to lower the trade deficit. Currently, India imports a significantly larger portion of goods from China than it exports to the country.
Additionally, China and Pakistan, another key player in the ISC, are taking measures to boost their trade relationship by breaking down trade barriers. 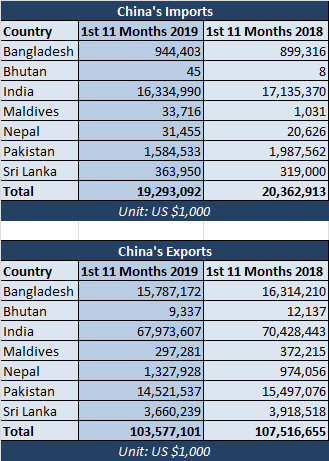 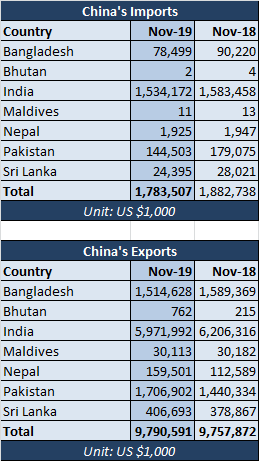 Danish shipping conglomerate A.P. Moller-Maersk said in its Q2 2019 India Trade Report that shipments from India to China during the second quarter compared to one year prior were hindered by “a significant fall in the demand for India-made textiles and apparel, plastic and rubber, which were large export commodities in the corresponding period last year.”

Bilateral collaboration. Although container capacity and merchandise trade between Asia and the ISC has been sluggish, China and India are trying to strengthen their trade relationship, while China and Pakistan are also breaking down trade barriers and India is also building strong trade ties in Southeast Asia.
The Prime Minister of India, Shri Narendra Modi, and the President of the People’s Republic of China, Mr. Xi Jinping, held their Second Informal Summit in Chennai, India in October.
Commenting on the outcome of the summit, India’s Ministry of External Affairs said in an October press release that, “India and China will continue to work together for open and inclusive trade arrangements that will benefit all countries.”
“The two Leaders have decided to establish a high-level economic and trade dialogue mechanism with the objective of achieving enhanced trade and commercial relations, as well as to better balance the trade between the two countries,” India’s Ministry of External Affairs said. “They have also agreed to encourage mutual investments in identified sectors through the development of a manufacturing partnership.”
Additionally, President Xi Jinping “welcomed investments from India into China, including in the information technology and the pharmaceuticals sectors,” Foreign Secretary of India Shri Vijay Gokhale said.
China also appears to be strengthening its trade ties with Pakistan, one of its key trading partners in the ISC, through the "second phase" of the China-Pakistan Free Trade Agreement.
The agreement officially kicked into gear on Dec. 1, according to a press release issued by China’s Ministry of Commerce. The trade agreement was originally signed in November 2006 and came into effect in July 2007. China and Pakistan had launched the second phase of the trade agreement negotiations in March 2011 and concluded the negotiations in April 2019.
The revised agreement “stipulates that the proportion of tariff lines with zero-tariff products between China and Pakistan will gradually increase from 35% to 75%,” China’s Ministry of Commerce said in the December press release. “In addition, both parties will implement a 20% reduction in taxes on other products that account for 5% of their respective tax lines. After negotiations between China and Pakistan, the tariff reduction will be implemented as soon as possible after completing the necessary domestic procedures.”
Meanwhile, India has recently increased shipments of seafood and other refrigerated products to China as a result of a decline in China’s domestic protein production, Maersk said in its latest India Trade Report, which was for Q3 2019. “The Indian government is still in talks with China to open the meat segment, however, it is currently moving through Haiphong,” Maersk said. “In late first half of the year [2019], China took some strict measures on illegal cross trades from Vietnam, and announced duty reduction for seafood, which is another reason for export growth in the region.”
India has also been building ties with Southeast Asia, which could also help boost the Asia-ISC trade. Maersk also said in the Q3 2019 India Trade Report that, “Malaysia is considering raising imports of raw sugar and buffalo meat from India.” Additionally, Maersk said, “India has asked Indonesia to reduce import quota restrictions on the auto sector and has reiterated its demand for greater market access for reefer and agriculture exports. Indonesia has assured India that it will facilitate the sourcing of sugar and other reefer products such as musk melon, bitter gourd, grapes and pumpkins by reducing tariffs and regularising standards as per India’s prerequisite.” 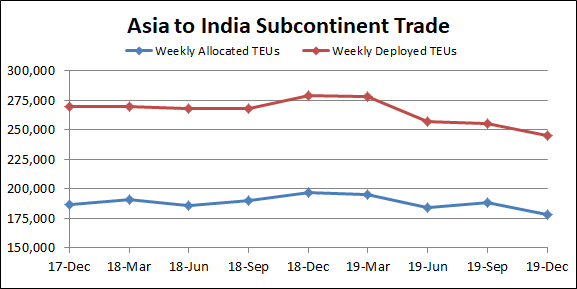 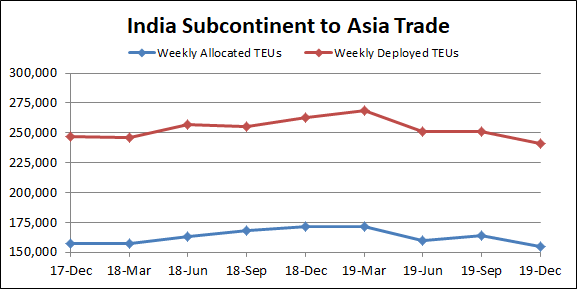 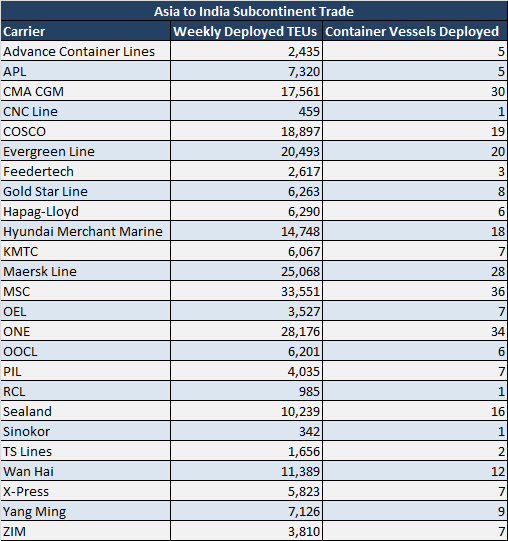 On the eastbound ISC to Asia route, the same 25 companies deploy vessels, although not necessarily the same amount as on the westbound leg, as illustrated in the table below. The top five carriers deploying the most capacity each week  from the ISC to Asia Evergreen Line, COSCO, Maersk Line, ONE and MSC. 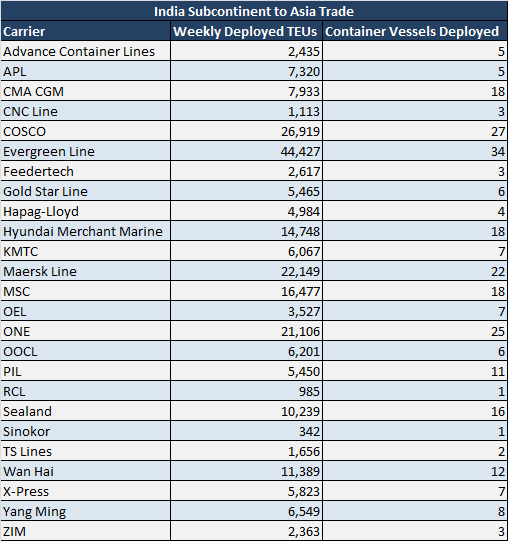 Alternate modes. Ocean container shipping between Asia-ISC is highly dependent on merchandise trade between China and India, especially since it’s the dominate method for moving goods between the two countries.
Rail freight between China and India is not very developed, while roads in India are still in need of progress, which creates bigger risks for trucking freight to be delayed, according to Hong Kong-based international freight forwarder SINO Shipping. Additionally, it’s especially hard for road freight to be competitive since most of the Chinese manufacturers are located near the Chinese seaports.

BlueWater Reporting outlook: Efforts to enhance trade relations between China, the ringleader in Asian commerce, and key economies in the ISC will likely strengthen the Asia-ISC container shipping route, although this is highly dependent on whether (and to what extent) China will break down trade barriers and actually import more goods from India.
Interested in our data? Contact sales here for more information