Reports
Charts
World Liner Supply Analytics
World Liner Supply Reports new
Dashboards
Schedule a Presentation
Point-to-Point Schedules
Schedules By Vessel
Schedules By Port
About Us
Create an Account
Help Desk
← Reports
Choosing the right U.S. coast from Asia
BlueWater Reporting looks at the pros and cons of the U.S. East Coast and the U.S. West Coast for imports from Asia, as well as the outlook for the throughput tug of war.
By Hailey Desormeaux on Oct 14, 2019 12:10 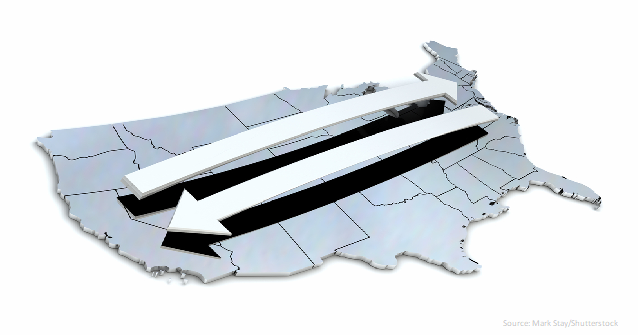 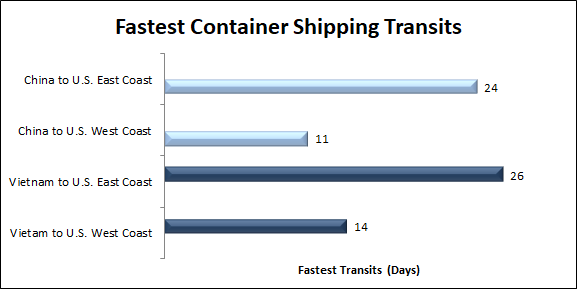 Even if the target consumers are on the U.S. East Coast, it would still be faster to rely on a U.S. West Coast port and have the goods shipped eastward via rail or road.
“If you ship into Los Angeles, products can move by road to 90% of the U.S. population in 5 days and by rail in 8-9 days,” according to Weber Logistics. “This overland transportation does come with a cost. Intermodal with rail is cheaper, but you then lose even more of your time advantage from bringing imported goods into the West Coast.”
As a result of faster transits, U.S. West Coast ports are better for high value shipments or seasonal goods with a shorter shelf life.
Although shipping goods arriving at U.S. West Coast ports eastward via truck or rail results in added costs, Weber Logistics pointed out how doing so reduces the amount of inventory needed to carry, since goods are getting to market faster. “For companies importing from Asia, shifting more freight to East Coast ports would require you to carry significantly more inventory, increasing inventory carrying costs by as much as 30%,” the company explained. “As a result, the total cost to ship products would exceed the benefit of having products ‘land’ closer to populated Eastern U.S. cities.”
Even though overland costs across the U.S. can add up quickly, relying on U.S. West Coast ports for Asian goods is a shorter maritime voyage, and therefore, cheaper for the ocean portion of the voyage than from Asia to the U.S. East Coast. For instance, as of Oct. 11, the Shanghai Shipping Exchange’s Shanghai Containerized Freight Index showed spot container rates from Shanghai to the U.S. West Coast stood at just $1,313 per FEU, while spot container rates from Shanghai to the U.S. East Coast totaled $2,335 per FEU.
In addition to substantially faster transits from Asia to the U.S. West Coast compared to the U.S. East Coast, there are nearly double the amount of container shipping services offered from Asia to the U.S. West Coast, giving shippers many more options, as illustrated in the charts below, which were built using data from BlueWater Reporting’s Capacity Report. 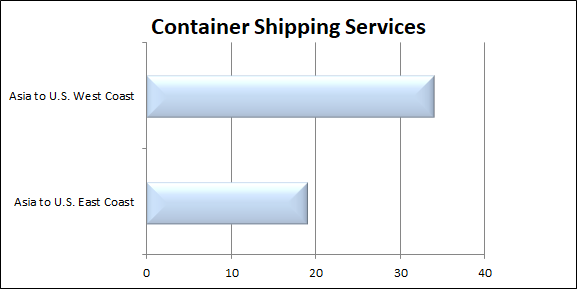 U.S. East Coast port benefits. U.S. East Coast ports have been undergoing more upgrades in recent years than their West Coast counterparts, and have also seen container volumes grow at a faster rate. Additionally, some of the ports along the U.S. East Coast have put a strong focus on combatting congestion and making sure cargo flows as efficiently as possible through the development of inland ports.
In 2013, Cordele Inland Port, through Cordele Intermodal Services, a privately owned logistics provider that specializes in container handling and over-the-road trucking, became Georgia’s first inland port.
Also in 2013, Inland Port Greer opened in South Carolina, while in 2018, Inland Port Dillon opened in South Carolina. Both inland ports are owned and operated by the South Carolina Ports Authority (SCPA).
Additionally, the Appalachian Regional Port, operated by the Georgia Ports Authority, opened in northwest Georgia in 2018.
U.S. East Coast ports also benefit from higher population density. “Nearly two-thirds of the U.S. population takes residence east of the Mississippi River. With the rise of e-commerce and the population base, we anticipate TEU volumes on the East Coast to continue the upward growth trajectory,” according to JLL’s 2019 Port, Airport & Global Infrastructure (PAGI) Seaport Outlook.
The charts below, built using data from BlueWater Reporting’s Capacity Report and Carrier/Trade Route Deployment Report, illustrate how even though more container capacity is deployed on the Asia to U.S. West Coast trade, the Asia to U.S. East Coast trade has seen rampant growth in recent years.
Average vessel size from Asia to the U.S. East Coast has now surpassed average vessel size from Asia to the U.S. West Coast by a hair.

Even this year, loaded container imports at the two busiest U.S. East Coast ports have grown at a faster rate year-over-year than the U.S. West Coast’s top busiest ports, as illustrated in the chart below, which was built using data from the relevant port authorities.

Throughput tug of war. U.S. East Coast ports could steal some business from U.S. West Coast ports as a result of the trade war, but U.S. West Coast ports could benefit from the International Maritime Organization’s 2020 Sulfur Cap, although it is still somewhat too early to tell.
In regards to the U.S.-China trade war potentially moving business from the U.S. West Coast to the U.S. East Coast, SCPA President and CEO Jim Newsome told BlueWater Reporting in an emailed statement in September, “China remains our biggest trading partner, but we do anticipate an accelerated shifting of sourcing to Vietnam and other Southeast Asian countries over time. This will generally be beneficial to East Coast ports as it narrows the transit time disparity between West and East Coast services. This shift to Southeast Asia will see more freight moving via the Suez Canal as this is the most logical routing. We also see this opening the door for 18,000-TEU deployments to the East Coast, which S.C. Ports is prepared to handle now as we invest in our infrastructure, build a new container terminal and deepen Charleston Harbor to 52 feet. By 2021, we will have the deepest harbor on the East Coast. It is important to note however that we do not expect changes in sourcing to happen quickly as the China supply chain is extremely well established.”
However, there is now a glimmer of hope the U.S.-China trade war could potentially simmer down. On Oct. 11, a briefing statement issued by the White House said U.S. President Donald Trump announced that the U.S. and China have “come to a very substantial phase one deal.” U.S. Treasury Secretary Steven Mnuchin said that the U.S. will not be implementing the increase of tariffs that were scheduled to go in place Oct. 15 from 25% to 30%.
Meanwhile, higher fuel costs expected from the International Maritime Organization’s 2020 Sulfur Cap could be a substantial incentive to move more goods from Asia to the U.S. West Coast, since it’s a shorter ocean voyage than to the U.S. East Coast, and therefore, it will help mitigate the costs of higher bunker fuel prices expected.
Regardless of these two factors, U.S. East Coast ports can expect container volumes to continue growing at a faster rate than U.S. West Coast ports. This is largely because U.S. East Coast ports are still undergoing upgrades to handle larger containerships in the wake of the 2016 Panama Canal Expansion.