Reports
Charts
World Liner Supply Analytics
World Liner Supply Reports new
Dashboards
Schedule a Presentation
Point-to-Point Schedules
Schedules By Vessel
Schedules By Port
About Us
Create an Account
Help Desk
← Reports
Diving deep into the Americas
The U.S.-ECSA trade has held strong over the years despite a downturn on the U.S.-WCSA trade.
By Hailey Desormeaux on Oct 08, 2019 16:10 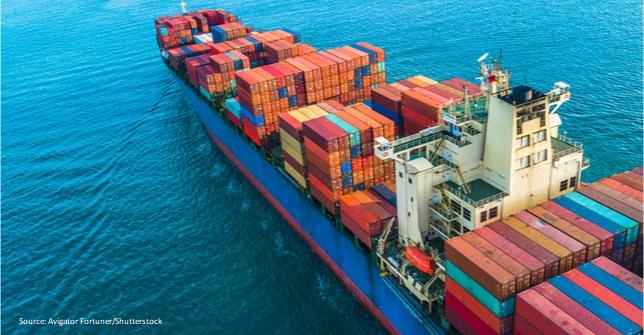 Container shipping carriers have managed to steadily beef up their presence on trade between the U.S. and the East Coast of South America (ECSA) over the years, although their footprint between the U.S. and the West Coast of South America (WCSA) has been on the decline.
Looking at U.S. trade with WCSA countries between 2014 and 2018, data from the U.S. Census Bureau shows U.S. goods imports and exports with Ecuador have actually fallen, while U.S. exports to Chile and Peru have also decreased.
Meanwhile, on the ECSA, Brazil, which is South America’s largest economy, has been climbing out of the recession it was in from 2014-2016, and U.S. trade with the nation has since been increasing in terms of imports and exports.

This report will look at:
•    Container capacity trends on these trade lanes over the years, in terms of deployed and allocated capacity, the number of services offered, the number of carriers supplying vessels and average vessel size (TEUs);
•    Fastest port-to-port transits on these trade lanes offered by direct services (not transshipment);
•    The specific container shipping services that are offered on the trades, and where they sail to;
•    And the container shipping carriers that have the largest footprint on the trades.

Capacity trends. The tables below illustrate how capacity - including allocated and deployed - between the U.S. and ESCA (southbound and northbound) has increased over the last five years. There was a slight dip in capacity from the U.S. to ECSA in 2015 and 2016, reflecting Brazil’s recession. Weekly deployed capacity refers to the amount of capacity deployed on the trade lane each week, while weekly allocated capacity refers to how much of that capacity is actually set aside for shipments on the trade lane.

Meanwhile, capacity - including allocated and deployed - between the U.S. and WCSA in both directions has drastically declined between 2014 and 2019. Average vessel size has also fallen, despite average vessel size on most trades typically increasing over the years from carriers building larger and larger containerships.

Transit times. Nine of the ten top quickest container shipping transits from the U.S. to ECSA involve a Brazilian port, with the fastest transits taking 11 days from New Orleans to Suape.

Meanwhile, the fastest container shipping transits from the U.S. to WCSA take eight days, from either Miami, Port Everglades or San Diego.

On the northbound route from ECSA to the U.S., nearly all of the quickest transits offered are aboard the ABUS TANGO/SEC, jointly operated by Hamburg Sud, Hapag-Lloyd and Maersk Line.

On the northbound route from WCSA to the U.S., where there aren’t even ten port-to-port transit options, the fastest transits offered are from Guayaquil, Ecuador to Miami and take only six days.

Container shipping services. The table below illustrates container shipping services operating between the U.S. and ECSA, as well as their vessel deployment areas (VDAs), which show all trade regions each service calls. All five loops serve trade on the northbound and southbound routes between the U.S. and ECSA. One of the loops is dedicated to the trade, while the other four don’t stray too far away from the trade, with calls in the Caribbean, Central America, and/or the North Coast of South America.

This table below illustrates the six container shipping services operating on the U.S. to WCSA trade, but only four of these services operate on the WCSA to U.S. trade. Two of these six services call North Europe or the Mediterranean, while one is dedicated to the U.S.-WCSA trade, and three also call nearby regions.

Carrier footprint. MSC, followed by Hapag-Lloyd and Hamburg Sud have the largest presence on trade between the U.S. to/from ECSA. 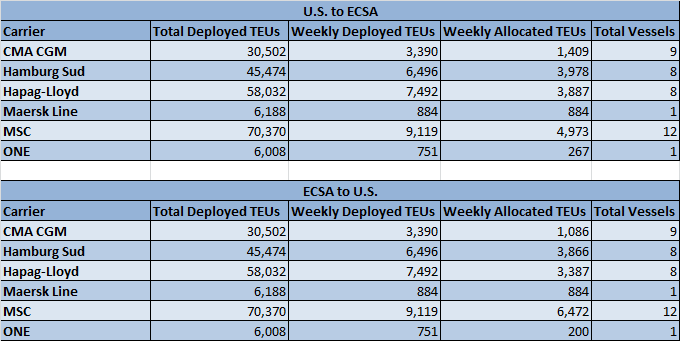 Meanwhile, from the U.S. to WCSA, MSC has the largest presence, followed by Maersk and its SeaLand subsidiary. However, from WCSA to the U.S., which MSC does not even serve, SeaLand has the largest footprint by far.