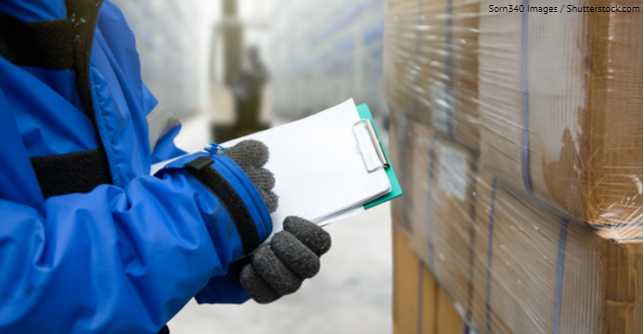 Rising rents and scarce space. The U.S. industrial and logistics sector saw availability stand at 7.0% in the first quarter of 2019, unchanged from the prior quarter, but lower than the 7.3% availability rate recorded in the corresponding 2018 period, according to data from CBRE.
The 7.0% availability rate marks the lowest since the fourth quarter of 2000, CBRE said in its report, “U.S. Industrial & Logistics Figures Q1 2019,” which was released in April.
Meanwhile, net, net net (NNN) asking rent rates in the U.S. industrial and logistics sector for the first quarter of 2019, on a per-square-foot and per-annum basis, averaged $7.51 per square foot, the highest level since CBRE began tracking the metric in 1989 and up from $7.01 per square foot for the first quarter of 2018, the report said. NNN figures include taxes, property insurance and common area maintenance charges in addition to the base rent.
In terms of location, CBRE said Detroit had the lowest availability rate during the quarter at 3.1%, followed by Salt Lake City at 4.2%; Milwaukee and Portland at 4.3%; Las Vegas and the San Francisco Peninsula at 4.4%; and Cincinnati, Cleveland and Los Angeles at 4.5%.
On the flip side, San Antonio had the highest availability rate during the quarter at 12.7%, followed by Austin at 11.7%; Nashville at 11.1%; Greenville at 10.8%; and the Walnut Creek/I-680 Corridor at 10.6%.
In terms of NNN asking rents for the quarter, Kansas City was the cheapest at $3.26 per square foot, followed by Memphis at $3.35, Greenville at $3.36, Columbus at $3.81 and Louisville at $3.86.
Meanwhile, the highest NNN asking rents for the quarter were in the San Francisco Peninsula at $36.25 per square foot, San Jose at $22.96, San Diego at $13.13, Walnut Creek/I-680 corridor at $12.60  and Oakland at $12.48.

Suburban shift to urban cores. New multistory distribution centers are sprouting up in urban areas across the U.S., despite industrial developers in recent history favoring big, horizontal facilities in suburban and exurban areas, where they are cheaper to build and rent, JLL said in its Q1 “Industrial Outlook” report for the U.S., which was released in May.
“The growth of e-commerce and increasing customer service expectations have intensified the need for fast delivery,” JLL said. “To get a warehouse with enough storage capacity that is close enough to nodes of consumers, the only way to go is up.”
CBRE even noted in a June press release that companies have “raced to expand their e-commerce distribution networks for close proximity to as many customers as possible.”

Trends near seaports. Being that many U.S. seaports tend to be located in larger cities, the trend of developing industrial and logistics space in more urbanized areas is, in many cases, resulting in more availability near some of the nation’s most prominent ports.
The chart below, which was constructed using data from CBRE, illustrates that even though the nation’s overall availability rate declined year-over-year in the first quarter of 2019, availability in most of the nation’s prominent port cities increased.
Availability in the first quarter of 2019 rose year-over-year in Charleston, Oakland, Orange County, Calif. (which is in the Los Angeles metropolitan area), Savannah and Seattle. However, availability over this time period remained unchanged in Houston and Los Angeles, while the northern New Jersey region followed the nation’s general trend of decreased availability. First-quarter 2019 figures were not available for Norfolk. 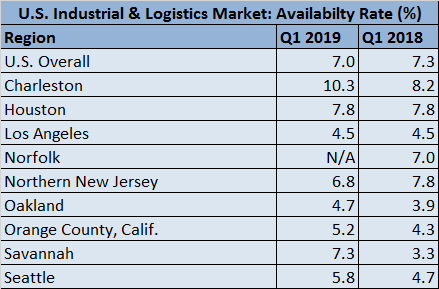 The chart below, which also was built using CBRE data, illustrates that net asking rents in these major port cities increased year-over-year in the first quarter of 2019, except in Seattle, which saw a modest decline. 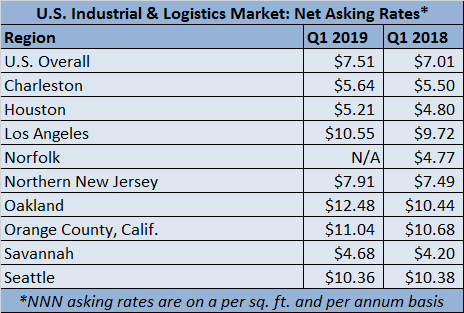 The huge role these cities play in the nation’s container shipping operations is illustrated in the chart below, with throughput data gathered from the relevant port authorities and the number of liner services gathered from BlueWater Reporting’s Port Dashboard tool.

Cold storage demand heats up. The U.S. cold storage segment in particular is expected to see skyrocketing growth in the coming years, largely due to a projected increase in online grocery sales.
“Much of the cold storage sector’s growth is likely to occur in gateway markets like Los Angeles and the New York area, as well as leading food-production states, such as California, Washington state, Florida, Texas and Wisconsin,” CBRE said in a June press release.
Leading states for cold storage space include California at 396.5 million cubic feet, Washington at 271.3 million cubic feet, Florida at 259.4 million cubic feet, Texas at 231.4 million cubic feet and Wisconsin at 228.1 million cubic feet.
“The challenges of constructing and modernizing cold storage facilities to keep up with the strong growth of online grocery sales has driven consolidation in the industry as firms seek to gain economies of scale,” CBRE said. “Four companies (Lineage Logistics, Americold, United States Cold Storage and VersaCold Logistics) control 73.4% of the refrigerated warehouse space in North America.”

The road ahead. The U.S. industrial and logistics market is expected to hold strong throughout the remainder of 2019 with low availability and high rent prices, while the outlook for 2020 and beyond is showing mixed signals.
A projected slowdown in global GDP growth and U.S.-China trade tensions could result in more availability and a decline in rent prices in the U.S. industrial and logistics sector.
The Organization for Economic Cooperating and Development said in its economic outlook released in May that it expects real global GDP growth will total 3.2% in 2019 and 3.4% in 2020, down from a growth rate of 3.5% in 2018.
In regard to tariffs the U.S. has implemented on Chinese goods, a CBRE spokesperson told BlueWater Reporting in May that “the impact in the industrial sector won’t be felt until/unless consumers start scaling back due to higher prices.
“It’s very difficult to predict what is going to happen with the current administration though,” the spokesperson added.
It appears U.S. imports still have yet to let up, considering U.S. ports covered by the Global Port Tracker handled 1.75 million TEUs in April, the latest month for which after-the-fact numbers are available and which was up 8.4% from March and up 6.9% year-over-year. The Global Port Tracker is produced for the National Retail Federation by the consulting firm Hackett Associates and includes the U.S. ports of Los Angeles, Long Beach, Oakland, Seattle, Tacoma, New York/New Jersey, Port of Virginia, Charleston, Savannah, Port Everglades, Miami, Jacksonville and Houston.
Despite GDP growth expected to slow and trade volatility, CBRE said in its “Q1 2019 U.S. Industrial & Logistics Figures” that “a still-robust labor market and rising wages will continue to be a primary driver of overall economic growth and demand for industrial space. The continued strength of the U.S. dollar, rising nominal incomes and low inflation will likely lead to more imported goods, which bodes well for the industrial sector. Each dollar increase in imports consumes three times more warehouse space than each dollar increase in exports.”