Reports
Charts
World Liner Supply Analytics
World Liner Supply Reports new
Dashboards
Schedule a Presentation
Point-to-Point Schedules
Schedules By Vessel
Schedules By Port
About Us
Create an Account
Help Desk
← Reports
‘Expect additional mergers and pray for no Hanjins’
Financial burdens from the IMO’s 2020 sulfur cap, a projected slowdown in trade growth and the looming threat of overcapacity could bump out some carriers.
By Hailey Desormeaux on Jun 11, 2019 05:06 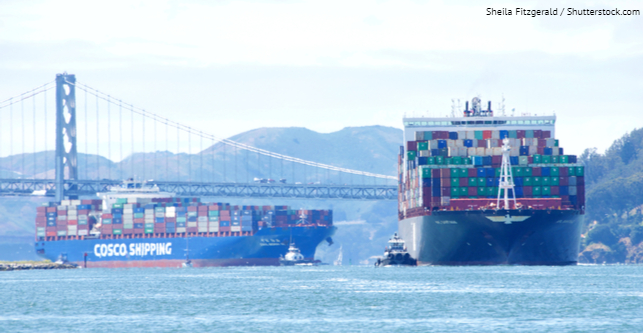 The container shipping industry has continued to present shippers with fewer choices in terms of the number of carriers and services they have to choose from, and this trend is not expected to let up anytime soon.
The dwindling choices are primarily a result of container carriers aggressively consolidating operations over the last several years in order to stay afloat and not end up like Hanjin, South Korea’s largest carrier when it filed for bankruptcy in 2016.
Rampant vessel delivery in 2019 and 2020, an expected slowdown in global trade, exacerbated by the trade war between the United States and China, and the International Maritime Organization’s (IMO) 2020 sulfur cap placing huge financial burdens on carriers could cause the number of carriers to further dwindle as a result of mergers and acquisitions or, in an extreme case, bankruptcy.
However, factors that could somewhat hinder this trend include carriers becoming better at managing capacity in recent months by being more aggressive in blanking sailings and showing less interest in ordering record-breaking size containerships and instead focusing more energy on advancing technology and branching out from their core container liner operations, such as CMA CGM acquiring CEVA Logistics.

Consolidation trends. Shippers saw options quickly dwindle in April 2017, in particular, when the number of container shipping alliances participating on major east-west trades declined from four alliances —the 2M Alliance, Ocean Three Alliance, CKYHE Alliance and G6 Alliance — to the current three alliances: the 2M Alliance, Ocean Alliance and THE Alliance.
In terms of the four alliances:
• The 2M Alliance consisted of — and still consists of — Maersk Line and MSC;
• The Ocean Three Alliance consisted of CMA CGM, UASC  and CSCL;
• The G6 Alliance consisted of APL, Hapag-Lloyd, HMM, MOL, NYK and OOCL;
• And the CKYHE Alliance consisted of COSCO, “K” Line, Yang Ming, Hanjin and Evergreen Line.
In terms of the current three alliances:
• The 2M Alliance continues to consist of just Maersk Line and MSC;
• The Ocean Alliance is made up of CMA CGM and its APL subsidiary, Evergreen Line, COSCO and OOCL;
• And THE Alliance is Hapag-Lloyd, Yang Ming and the Ocean Network Express (ONE), a container shipping joint venture that consists of NYK, “K” Line and MOL.
In addition to Hanjin filing for insolvency in the third quarter of 2016 and officially being declared bankrupt in February 2017, COSCO and CSCL officially merged in February 2016 and Hapag-Lloyd officially acquired UASC in May 2017. Additionally, ONE began its container operations in April 2018.
The chart below, which was built using data from BlueWater Reporting’s Carrier/Trade Route Deployment Report, illustrates that the number of containership operators on trades around the globe has generally decreased between the end of May 2014 and the end of May 2019. In particular, the Asia-North Europe, Asia-Mediterranean, Asia-Oceania, Asia-East Coast South America and North Europe-North America lanes saw sharp declines in the number of containership operators over this time period. 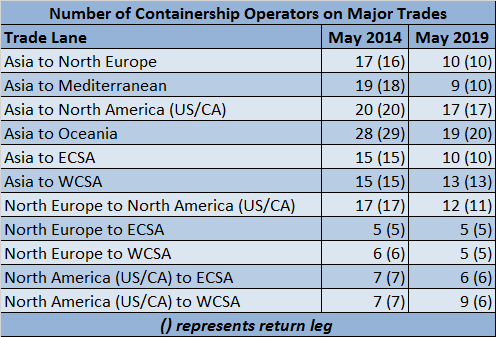 The number of container services on many of the world’s most prominent global trades also took a sharp downturn over this time period, as illustrated in the chart below, which was built using BlueWater Reporting’s Capacity Report. The Asia-North Europe and Asia-Mediterranean lanes saw the largest declines in the number of container services over this time period. 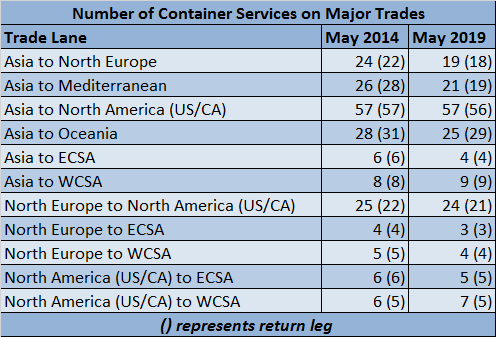 Looking at how consolidation has impacted the key Asia-to-North Europe and Asia-to-North America trades, currently on the Asia-to-North Europe trade currently, where 10 carriers collectively deploy 264,746 TEUs a week, the top three carriers on the trade — Maersk Line, COSCO and Hapag-Lloyd — deploy 52.2% of this capacity each week at 138,169 TEUs, as illustrated in the chart below, which was built using BlueWater Reporting’s Carrier/Trade Route Deployment Report.

Currently on the Asia-to-North America trade, where 17 carriers collectively deploy 431,801 TEUs per week, the top five carriers on the trade — Maersk Line, ONE, COSCO, Evergreen Line and CMA CGM — deploy 60.3% of this capacity each week at 260,310 TEUs, as illustrated in the chart below, which also was built using BlueWater Reporting’s Carrier/Trade Route Deployment Report.

Looking deeper into how actual alliances hold an extensive amount of power on these two trades, from Asia to North Europe, alliance-operated services collectively deploy 97.5% of the overall weekly deployed capacity on the Asia-to-North Europe trade. The chart below, built using data from BlueWater Reporting’s Capacity Report, shows that the Ocean Alliance deploys the most capacity each week on the trade, followed by the 2M Alliance and THE Alliance.
The Ocean Alliance and the 2M Alliance each operate six services on the Asia-to-North Europe trade, while THE Alliance operates five. No other carriers provide vessels on these abovementioned services. Additionally, there are two loops on the trade not operated by an ocean carrier alliance.br>

Who is next? In terms of future mergers and acquisitions, it’s likely safe to assume larger carriers will not be merging with other large, global carriers due to the likelihood of a deal of this scale getting blocked by competition authorities.
In June 2013, Maersk, MSC and CMA CGM announced their plans to form a container shipping alliance known as the P3 Network, although the deal was subject to relevant regulatory authorities. In June 2014, the deal was rejected by the Ministry of Commerce of the People’s Republic of China (MOFCOM) due to competition concerns in the Asia-Europe market. As of Jan. 1, 2014, Maersk, MSC and CMA CGM collectively held a capacity share of 46.7% on the Asia-Europe route, with Maersk holding a 20.6% share, MSC holding a 15.2% share and CMA CGM holding a 10.9% share, making them the top three carriers on the route, according to MOFCOM.
Drewry even said in its March 31 Container Insight Weekly newsletter, “The possibility of any takeovers among the top seven lines is remote in our opinion, primarily due to the likelihood of such deals being shot down by competition regulators.”
ONE’s Nixon had said in April that mergers and acquisitions are getting more challenging due to regulatory hurdles, as well as there being less players to absorb. However, he said there is probably more room for consolidation involving some of the niche carriers in regional markets.
BIMCO’s Sand said in the May emailed statement that BIMCO believes consolidation among the larger carriers may not be approved by competition authorities due to being close to the market share limits set by relevant authorities.
“Consolidation amongst the smaller carriers will only come around if one nation/government decides to merge a few carriers into one larger ‘national carrier,’” he said. “Most likely, we will see larger carriers acquire smaller ones — again, pending on approval from relevant authorities.”