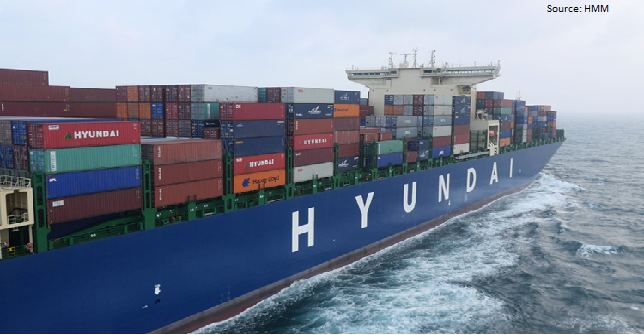 Hyundai Merchant Marine’s (HMM) plan to officially join THE Alliance in 2020 will likely benefit both sides, but it appears HMM has much more to gain from the deal.
THE Alliance commenced operations on April 1, 2017, and currently includes Hapag-Lloyd, Yang Ming and the Ocean Network Express (ONE).
HMM’s inclusion into THE Alliance is expected to begin April 1, 2020, but is still subject to regulatory approval.
The planned addition of HMM to THE Alliance will allow both parties to expand their scope. Although HMM has a lot to gain for joining THE Alliance, it will still be extremely beneficial for THE Alliance since it currently has a smaller global market share than the 2M Alliance and the OCEAN Alliance, which are the two other container shipping alliances operating on major east-west trades.
HMM not only gains the backing of being in a global container shipping alliance as a full member, but it plans to join an alliance with carriers that all currently have a larger operating fleet capacity and are more financially stable.
In terms of net profit/loss for the quarter ending March 31, 2019, and for the 2018 financial year (ending Dec. 31, 2018 for HMM, Yang Ming and Hapag-Lloyd and March 31, 2019 for ONE), HMM was the weakest link in both instances.
HMM has 12 23,000-TEU and eight 15,000-TEU eco-friendly container vessels on order. They will be a game changer for both the carrier and THE Alliance, especially considering the largest vessels currently in HMM’s fleet are just 13,154 TEUs, while the biggest boxships currently operating on the seas are OOCL’s 21,413-TEU ships. Although, larger vessels are not exactly what the industry needs at the moment, these new and modern vessels will be installed with scrubbers to comply with the 2020 sulfur cap and will also help to keep down the aggregate age of THE Alliance members’ fleet.

Whose making money? Between HMM and current members of THE Alliance, Hapag-Lloyd was the only carrier to post a profit for the quarter ending March 31, 2019, and for each member’s 2018 financial year, as illustrated in the chart below, which was built using data from each member’s financial statements.
Although Yang Ming, ONE and HMM all posted a loss in their 2018 financial year and for the quarter ending March 31, 2019, HMM’s net loss was substantially the most severe in both instances.
All currency conversions to U.S. dollars for HMM, Hapag-Lloyd and Yang Ming in the charts below are based on conversion results gathered in July 2019. ONE — the container shipping joint venture between MOL, “K” Line and NYK — reported its results in U.S. dollars, and since it did not officially commence operations until April 1, 2018, there were no prior year-over-year results for ONE.

Despite HMM posting a net loss for the quarter ending March 31, 2019, the carrier managed to boost revenues 18.3% year-over-year to KRW 1.32 trillion, which it said was “due to growth in the container volume handled with service expansions.” The carrier’s container handling volumes totaled 1.09 million TEUs for the quarter, a 10.8% jump from a year prior.

A safety net. THE Alliance’s contingency fund will still continue forward with the planned addition of HMM.
THE Alliance established the contingency fund to help member carriers manage through, and recover from, the potential insolvency or financial distress of a participating line and to ensure the continued movement of boxes should such an event occur.
Commenting on how HMM joining THE Alliance would impact the contingency fund, Nils Haupt, Hapag-Lloyd’s senior director of corporate communications, told BlueWater Reporting in July that, “After restructuring, HMM has proven they are a strong carrier, and many measures have been taken the last 18 months to stabilize the situation. We are certain that there will always be a Korean shipping line, which has the necessary backing of the relevant Korean government institutions. This has repeatedly been emphasized by Korean Government officials. However, in the event that one or more members of THE Alliance were to encounter financial difficulties, THE Alliance plans to maintain the innovative contingency and has its emergency fund in place, which will be increased accordingly.”

THE Alliance vs. HMM capacity. HMM currently has a significantly smaller operating fleet capacity than each member of THE Alliance, as illustrated in the chart below, which was built using data gathered in July from BlueWater Reporting’s Carrier Ranking Report. 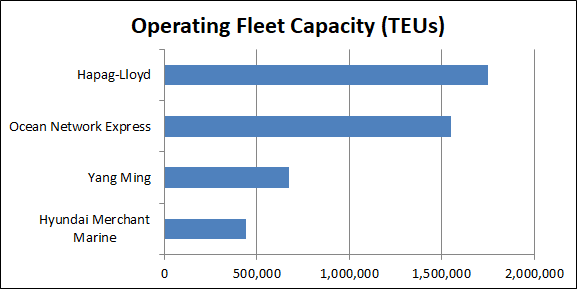 Currently, Hapag-Lloyd has an operating fleet capacity of 1.7 million TEUs, followed by ONE at 1.5 million TEUs, Yang Ming at 676,998 TEUs and HMM at 443,672 TEUs.
HMM will be substantially increasing its fleet over the next few years. An HMM spokesperson confirmed with BlueWater Reporting in July that delivery for its 12 23,000-TEU vessels on order will start from the end of April 2020 and delivery for its eight 15,000-TEU ships will start from the middle of April 2021.
HMM said in March it plans to install scrubbers on these 20 eco-friendly containerships.
When THE Alliance and HMM jointly announced in July their plans for HMM to join THE Alliance, they noted how HMM’s 23,000-TEU newbuildings will be deployed on the Far East-North Europe trade.
Although it will be an asset to have modern, eco-friendly vessels, the space these behemoths offer will likely exacerbate overcapacity issues container shipping carriers are already dealing with, particularly on this trade.
The composite spot container rate reading of Drewry’s World Container Index (WCI) stood at $1,373 per FEU as of July 18, down 8% year-over-year, while the overall Freightos Baltic Index (FBX) reading stood at $1,374 per FEU as of July 19, down 2.8% year-over-year.
Results were worse for container carriers on the Asia to North Europe trades. Drewry’s WCI showed spot container rates from Shanghai to Rotterdam stood at $1,399 per FEU as of July 18, down 16% year-over-year, while the FBX showed rates from China/East Asia to North Europe as of July 19 totaled $1,367 per FEU, down 6.8% year-over-year.

THE Alliance vs. Other alliances. THE Alliance deploys the least overall capacity and has the smallest average vessel size when comparing alliance operated services across the globe, as illustrated in the chart below, which was built using data from BlueWater Reporting’s Capacity Report.
For the alliance services jointly operated with other carriers, only data from the alliance vessels were pulled from those services.

On the Asia to North Europe trade, the 2M Alliance currently deploys the most overall capacity, followed by the OCEAN Alliance and THE Alliance, as illustrated in the chart below. Of the three alliances, THE Alliance also deploys the fewest number of vessels, the least amount of services and has the smallest average vessel size. HMM also operates one loop on the trade, which deploys 15 vessels averaging 4,915 TEUs.

On the North Europe to North America trade, the 2M Alliance deploys the most overall capacity, followed by THE Alliance and then the OCEAN Alliance, while HMM operates no services on the trade, as illustrated in the chart below.