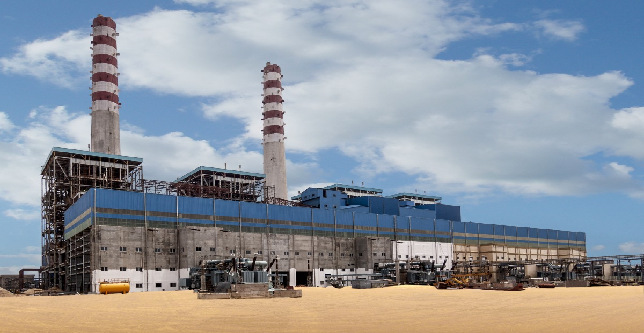 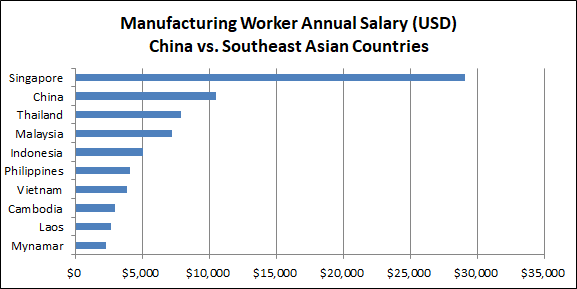 As a result, weekly allocated capacity (TEUs) from Southeast Asia to the U.S. has steadily increased over the years, while weekly allocated TEUs from China to the U.S. has remained relatively unchanged, as illustrated in the two charts below, which were built using data from BlueWater Reporting’s Capacity Report.
Weekly deployed TEUs refer to the amount of TEUs deployed on the trade lane each week, although some of this deployed TEU capacity is dedicated for other trade lanes. However, weekly allocated TEUs refer to the amount of that deployed capacity that is actually allocated specifically for a certain trade lane.
As of the end of August 2019, 281,905 TEUs were allocated each week towards the China to U.S. trade, down 0.5% from a year earlier, but up 2.0% from 2015.
Meanwhile, 49,117 TEUs were allocated each week towards the Southeast Asia to U.S. trade as of the end of August 2019, up 11.4% from a year earlier, and up 48.9% from 2015. 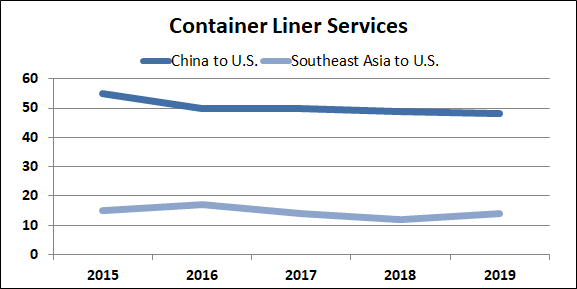 China’s silver lining. It’s no doubt that China still remains the world’s manufacturing powerhouse by a long shot, and this will not just change overnight.
China already has the infrastructure in place to handle its massive amount of exports. Additionally, there has been a huge uptick in new overland services, including rail and truck, between China and various European countries.
China is also much larger geographically than any of the Southeast Asian countries, where a lot of manufacturing growth is taking place. However, Mexico has land readily available and two coasts, making it a great place for companies to move manufacturing to.
Although China’s manufacturing operations will likely continue getting dispersed to other countries, it is expected to still remain the world’s top manufacturing hub for the foreseeable future, being that it would take time for other countries to even catch up.
In 2017, total merchandise exports from China to all regions around the globe were estimated to have stood at $2.16 trillion, with the entire European Union taking second place at $1.92 trillion, according to the Central Intelligence Agency’s World Factbook. In comparison, Mexico’s merchandise exports for the year were estimated to have totaled $406.5 billion.

U.S. import trends. China was the U.S.’ largest supplier of goods imports in 2018 and the U.S.’ third largest goods export market in 2018, according to the Office of the U.S. Trade Representative. Therefore, the steep tariffs the U.S. has slapped on Chinese goods, as well as the retaliatory tariffs China has issued on U.S. goods, will undeniably have an impact on China’s manufacturing.
Effects from the trade war are showing up in trade data. The chart below, built using data from the U.S. Census Bureau, shows how shipments from China to the U.S. and from the U.S. to China for the first 7 months of 2019 have both sharply declined from the corresponding 2018 period. This chart, as well as latter charts in this report that were built using data from the U.S. Census Bureau, contain figures on a nominal basis and are not seasonally adjusted. Last year, there was an uptick in shipments between China and the U.S. in both directions as shippers strived to frontload goods ahead of the tariffs.

The chart below, which was also built using data from the U.S. Census Bureau, illustrates the top 15 countries the U.S. imports goods from, as well as the value amount U.S. imports from these countries totaled each year from 2014 to 2018, and for the first 7 months of 2019.

The chart below, which was also built using U.S. Census Bureau data, illustrates U.S. goods imports from China versus Southeast Asia for the same timeframes.

Impact on carriers. Container shipping carriers have a lot at stake when it comes to the trade war, especially considering the amount of uncertainty they already have on their plates from Brexit, as well as the 2020 sulfur cap.
The chart below, built using data from BlueWater Reporting’s Carrier/Trade Route Deployment Report, shows just how much capacity each carrier deploys on the China to U.S. trade each week, as well as how much capacity they allocate to the trade each week. 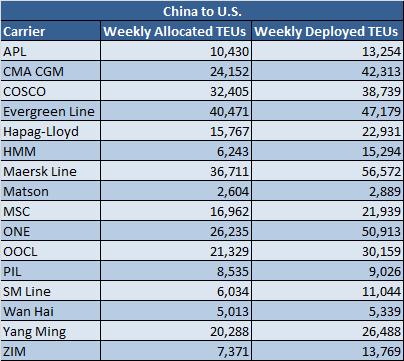 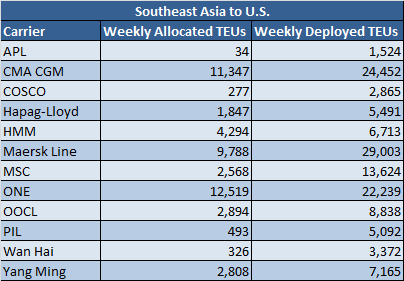 The road ahead. London-based shipping research and consulting form Drewry said in a June issue of its Container Insight Weekly newsletter that, “Potential losers in this trade war will be those countries that provide the raw materials and semi-finished goods to China that go into the re-export of the final products to the U.S. The U.S. itself could suffer, as China uses up some of its exports for re-exports.”
Data from the World Integrated Trade Solution shows that in terms of value, the top three countries China imported raw materials from in 2017 were Australia, Brazil and the U.S., while the top three countries China imported intermediate goods from in 2017 were South Korea, Japan and the U.S., meaning that these countries could possibly face the most brutal headwinds from the trade war.
Meanwhile, the U.S.-China Business Council (USCBC), a private, non-partisan, non-profit organization of over 200 American companies that do business with China, conducted a survey from its members in June, with the results released in August, which found that although respondents are still gaining profits from China operations, the positive outlook is starting to deteriorate.
“Companies will continue to invest in China to access Chinese consumers, but at the same time, rising production costs will push more companies to divest export focused operations from China,” the USCBC said.
In regards to the member companies’ objective for existing and future investments in China, 95% cited access to serve the China market, 24% said to use China as an export platform to serve markets other than the U.S., and 20% said to use China as an export platform to serve the U.S. market.
When asked if their China operations were profitable, 97% of members said yes. In regards to current year revenues from China, 52% expected an increase, 22% said they expected revenues to remain unchanged, and 26% said they expected a decrease. This was less positive than the annual survey conducted in summer of 2018, in which 78% of respondents said they expected an increase in revenues for the year, 13% said they expected revenues to remain unchanged, and just 9% said they expected a decrease.
When asked if their company moved or plans to move any operations out of China, 87% said no, compared to 90% saying no in the 2018 survey. However, the top reason cited for moving was trade tensions between the U.S. and China.

Conclusion: BlueWater Reporting expects manufacturing operations in other countries, such as Southeast Asia and Mexico, to continue growing at a faster rate than China, although China will remain the world’s manufacturing powerhouse for the foreseeable future. This outlook is regardless of whether or not the U.S.-China trade war comes to an end anytime soon, although an agreement between the two nations would subdue a manufacturing shift from China.