Reports
Charts
World Liner Supply Analytics
World Liner Supply Reports new
Dashboards
Schedule a Presentation
Point-to-Point Schedules
Schedules By Vessel
Schedules By Port
About Us
Create an Account
Help Desk
← Reports
Port of Hong Kong rapidly losing business
The deep-water transshipment hub continues to deal with an array of challenges, many of which are beyond its control.
By Hailey Desormeaux on Oct 29, 2019 19:10 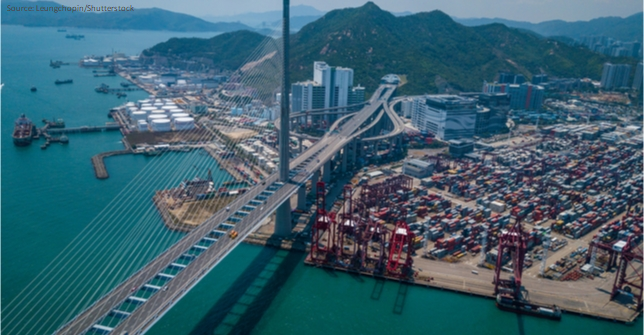 The Port of Hong Kong remains in troubled waters between sinking container volumes and more challenges on its plate than benefits.
Factors such as the U.S.-China trade war, political unrest within Hong Kong, a sluggish domestic economy and competition from nearby ports will continue to negatively impact business at the Port of Hong Kong.
On a bright note, the port offers strong advantages for refrigerated cargo shipments. Additionally, the Hong Kong Seaport Alliance (HKSPA) launched earlier this year to boost the port’s efficiency and competitiveness. However, it’s still too early to tell exactly how effective the alliance will be in doing so.

Hurdles for Hong Kong. The Port of Hong Kong used to be the busiest container port in the world in terms of total TEU volumes until 2005, and it has been declining ever since, as illustrated in the table below, which was built using data from the Hong Kong Marine Department.

The port has continued to see the container volumes decline continue on into 2019, as illustrated in the chart below, which was built using data from the Hong Kong’s Census and Statistics Department. 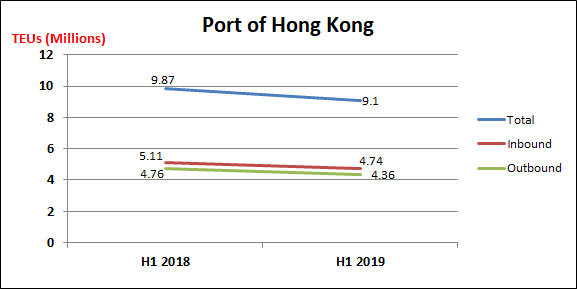 One key challenge for the Port of Hong Kong is the trade war between the U.S. and China, since the deep-water port acts as a major transshipment hub for international cargo. About 60% of the port’s container throughput is from transshipment cargo, according to the Hong Kong Marine Department.

Competition from nearby ports has also hindered the Port of Hong Kong’s business. Many nearby ports have undergone upgrades in recent years and are able to handle more, larger vessels, allowing carriers to avoid transshipment (and congestion) in Hong Kong.
“It is no secret that Guangzhou has been providing incentives to the shipping lines and logistics operators since the end of 2017 in order to win market share,” London-based shipping research and consulting firm Drewry said in its Q4 2018 Container Forecaster Report.
“The port complex lies on the west side of the Pearl River Delta, close to many new export factories, as well as to a rising population of domestic consumers,” Drewry said. “The west side of the Pearl River is less congested than the Shenzhen ports over on the east side, and its clear advantage over Hong Kong is that it averts the need for an expensive cross-border truck haul.”
An example of nearby ports gaining business can be seen in BlueWater Reporting’s database. For instance, the 2M Alliance’s TP17/America loop between Asia and the East Coast of North America, has already been calling Hong Kong, but it recent added a call to Nansha (within Guangzhou) this year. Nansha is called after Hong Kong on the service, thus providing shorter transits to North America than from Hong Kong. The TP17/America now has a rotation of Hong Kong, Nansha, Shekou, Yantian, Cai Mep, Singapore, New York, Charleston, Savannah, Miami, Freeport, Tanjung Pelepas and Hong Kong, as illustrated in BlueWater Reporting’s database.

Hope for Hong Kong. The Kwai Chung-Tsing Yi container terminals at the Port of Hong Kong handle about 80% of the port’s container throughput, according to the Hong Kong Maritime and Port Board website. There are nine different container terminals at the complex, 24 berths and five different terminal operators.
Four of the five terminal operators at the port - Hong Kong International Terminals Ltd., Modern Terminals Ltd., COSCO-HIT Terminals (Hong Kong) Ltd. and Asia Container Terminals Ltd. - formed the Hong Kong Seaport Alliance (HKSPA) earlier this year to boost the port’s efficiency and competitiveness.
Goodman DP World Hong Kong Ltd, the remaining container terminal operator, did not join the alliance, and only comprises one of the 24 berths.
The HKSPA started its progressive implementation on April 1 and the complete efficiency gains will be delivered over the next few years, Modern Terminals said in a June press release.
HKSPA’s members 23 of berths have been divided into three terminal zones. “By adopting a ‘terminal-neutral’ operating model, the HKSPA can improve the utilization of facilities and reduce more than 1,000 hours of vessel waiting time, thus saving 37,000 tonnes of marine fuel annually,” Modern Terminals said. “We also estimate that some 275,000 ITT [inter-terminal trucking] moves can be eliminated, again reducing costs to shipping lines. These changes will result in the reduction of 130,600 tonnes of carbon emissions.
“The HKSPA is also enhancing efficiencies for barge-service providers, thereby increasing the overall efficiency of the supply chain to and from the cargo-catchment areas along the Pearl River Delta,” Modern Terminals explained.
Additionally, HKSPA appears to provide strong offerings for the refrigerated cargo sector. The Port of Hong Kong is “the largest fresh fruit trading hub in South China,” Modern Terminals and Hong Kong International Terminals said in a joint press release issued in September.
The HKSPA offers a total of 7,866 reefer points, which is more than any other terminal in South China, and it has the capability to handle different types of refrigerated cargo (such as general, controlled atmosphere and sensitive).
"Hong Kong’s strategic location means major fruit markets in South China can be conveniently reached within hours", COSCO-HIT Terminals Managing Director Lawerence Shum said, according to the press reelease. "From the Hong Kong/Mainland boundary, fruit imports can reach Shenzhen by truck within an hour, Dongguan in 90 minutes, Guangzhou and Zhongshan within two hours, and Shanghai within 24 hours."
“The Port of Hong Kong has a lot to offer with its free port status, strategic location at the southern tip of China, high operational efficiency and flexibility,” Elin Wong, head of corporate affairs at Modern Terminals, told BlueWater Reporting in an October emailed statement.
“With its free port status, the Port of Hong Kong offers the flexibility of hot box arrangement, enabling containers to be picked up right after discharge from the ship. Containers can be delivered to markets in South China within hours. This is particularly important for delivery of fresh products,” Wong added. “Hong Kong is also renowned as a catch up port. With its high efficiency, the Port of Hong Kong helps carriers save time during a vessel call and to enhance schedule reliability.”

Carrier Footprint in Hong Kong. Container services calling Hong Kong that also sail to regions outside of Asia collectively deploy 475 container vessels, with Maersk, COSCO and the Ocean Network Express deploying the most vessels on these services, as illustrated in the table below, which was built using BlueWater Reporting data. 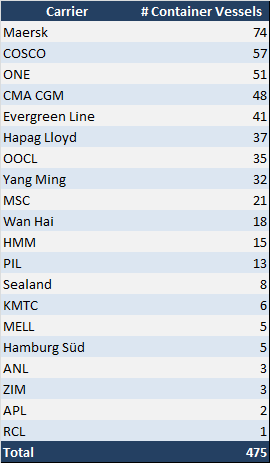 For container services calling Hong Kong that strictly serve Asia, Wan Hai has a strong lead in the number of container vessels deployed, as illustrated in the table below, which was also built using BlueWater Reporting data.

Outlook: BlueWater Reporting believes the outlook for the Port of Hong Kong remains grim, even if the HKSPA has any success in making the port more efficient and competitive. This is because sluggish volumes at the port are due to factors beyond the port’s control. For instance, cargo throughput at Hong Kong International Airport for the first 7 months of 2019 even fell 7% year-over-year, according to the Hong Kong Shippers’ Council. Until protests within Hong Kong and the U.S.-China trade war come to an end and Hong Kong’s economy improves, the port will have a difficult time in achieving any growth.
Interested in our data? Contact sales here for more information.