The Q2 2019 WLS Report provides information on:
• Estimated weekly allocated TEUs on 30 individual lanes operating between Europe, Asia, North America and South America, as well as changes from the prior quarter;
• Alliance market share data on major east-west trades and changes from the prior quarter;
• Liner shipping services that have been added and discontinued during the quarter;
• A breakdown of specific liner services offered on individual trades;
• Vessel information;
• And more!

Data from the report also shows how the three major container shipping alliances - which comprise the OCEAN Alliance, the 2M Alliance and THE Alliance - continue to monopolize major east-west trades by collectively gaining more market share, as illustrated in the chart below. This trend was particularly noticeable on the Asia to WCNA trade, where alliances collectively held an 80.2% market share at the close of Q2 in terms of weekly allocated capacity, up from a share of 77.7% at the close of Q1. 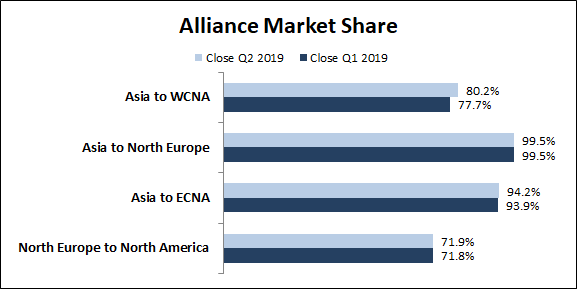