Commentary: Port of Oakland trudges forward, despite challenges
By Hailey Desormeaux on 18 Jul, 2019 12:36

Of the 16 container services calling the Port of Oakland from Asia, 11 have Los Angeles as their first U.S. West Coast port call, while five have Long Beach as their first U.S. West Coast port call.
During the Port of Oakland’s annual state of the port address in January of last year, Port of Oakland Executive Director Chris Lytle, who is slated to retire Friday, stressed how the port could benefit from becoming the first U.S. port of call from Asia.
He said, according to a press release issued by the port in January of last year, “international shipping lines view Oakland as a candidate for first-call service from Asia. A first call would drive up Oakland import volumes. The first port of call in the U.S. is where most imports are discharged.”
Although this has yet to happen, the Port of Oakland’s loaded import TEUs for the first half of 2019 grew 3% year-over-year, which was faster than the 1.8% year-over-year growth in loaded import TEUs at the Port of Los Angeles and the 9% drop at the Port of Long Beach.

Additionally, Oakland would be able to offer more competitive transit times from Asia to the U.S. West Coast if it was called before Los Angeles or Long Beach for services from Asia.
Currently, the fastest container shipping transits from Asia to the U.S. West Coast all involve the U.S. ports of Los Angeles, Long Beach, Seattle, Tacoma or Everett, as illustrated in the chart below, which was built using BlueWater Reporting’s Region to Region Transit Analysis tool. 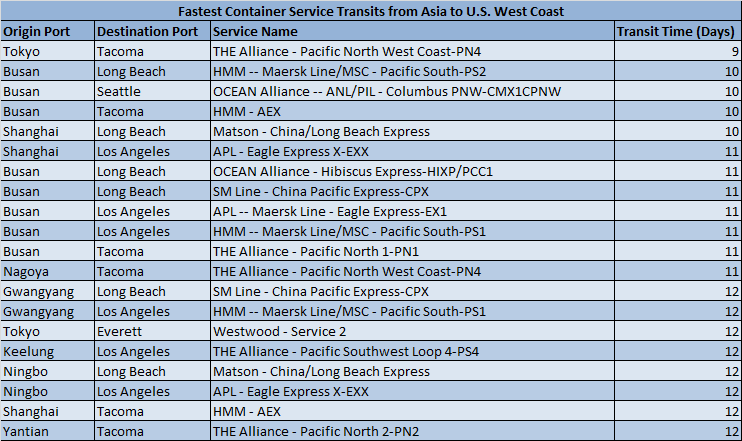 Although Oakland would greatly benefit from becoming the first U.S. West Coast port of call from Asia, it has managed to see growth in 2019. The port’s overall container volumes for the first six months of 2019 — including loaded and empty imports and exports — rose 3.6% from the corresponding 2018 period to 1.25 million TEUs and the port continues to maximize its potential.
The port’s commissioners last week approved the final permit for the first building at the Seaport Logistics Complex, the port announced Tuesday.
Situated at the heart of the port, the Seaport Logistics Complex is being developed right next to the port’s 3-year-old, $100 million rail yard.
CenterPoint will construct and manage the first building and plans to lease out the space to tenants engaged in cargo transportation and logistics, the port said. CenterPoint’s 460,000-square-foot facility is expected to be completed in mid-2020.
“The port envisions a campus where containerized cargo could be quickly transferred from ships to truck or rail,” the port said. “It’s expected to increase the volume of international shipments moving through Oakland.”