Blanked sailings not enough to keep rates afloat
By Hailey Desormeaux on 17 Oct, 2019 20:53 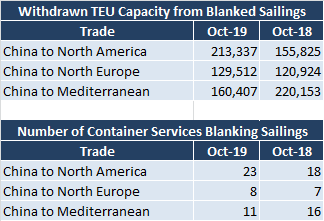 Looking at the remainder of the year:
• The OCEAN Alliance will blank 14 sailings on the Asia-North Europe/Mediterranean trade between the last week of October through December, according to data in a press release issued by OOCL earlier this week;
• The OCEAN Alliance will blank nine sailings on the Asia-North America trade between mid-October and early November, according to data in a press release issued by OOCL on Sept. 25;
• HMM’s Asia-North America PS2, which Maersk and MSC purchase slots on, will blank a sailing in mid-November, according to BlueWater data, in conjunction with an MSC announcement this week;
• THE Alliance will “seasonally suspend” its Asia-North America EC3 loop in the coming weeks and is expected to return to service in March 2020, according to a press release issued by Hapag-Lloyd last week;
• THE Alliance’s  Asia-North America PS5 and PS7 loops will gradually downsize their vessels in November, with this change expected to last until March 2020;
• And THE Alliance’s Asia-North Europe FE2 and FE4 loops are scheduled to each blank a voyage in November, while its Asia-Mediterranean MD3 is also expected to blank a voyage in November.