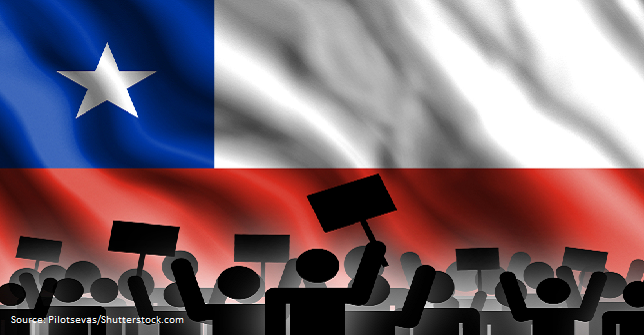 Chile is one of the most economically developed countries in South America, but recent civil unrest has created challenges that could potentially make future growth prospects much bleaker.
The Chilean economy is one of the most robust in South America, despite having a limited population and geographical footprint. It’s estimated that Chile has a population slightly under 18 million, according to a July 2018 estimate from the CIA World Factbook. Despite having a relatively small population, Chilean gross domestic product per capita in 2017 was $24,600 when adjusted for purchasing power parity. This metric ranks Chile as the most productive South American country, as illustrated by the chart below, which was built using data from the CIA World Factbook. 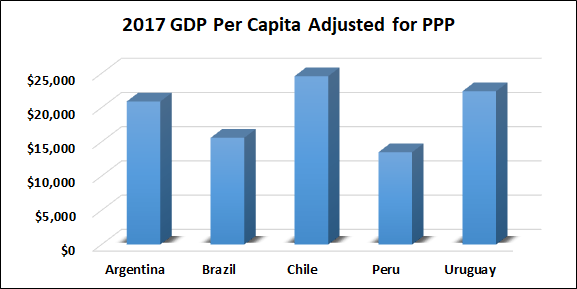 This impressive productivity ranking is partly due to factors such as a high literacy rate and robust financial markets, but the main driver of growth is natural resources. Chilean geography is physically small, but the Andes mountains have ample deposits of metals, such as copper, lithium, gold and silver. Chile is the top producer of copper in the world, and mines more than double the tonnage of the next closest competitor, Peru.
Copper is one of the most important components for construction, and with vast infrastructure projects, China is the largest importer of copper in the world. Due to Chinese need for copper, they have become the top trade partner for Chile, which benefits both countries. Chile benefits from the cash flow that raw resources produce, while China benefits from trading manufactured products to Chilean consumers.
The trade from China to West Coast South America (WCSA) can be measured using the BlueWater Reporting Capacity Report. It is important to highlight that WCSA also encompasses Peru, Ecuador and Colombia, although Chile makes up most of the trade. Between October 2017 and October 2018, weekly allocated TEUs on the China to WCSA trade rose a staggering 71.9%, from 14,202 TEUs to 24,417 TEUs. However, between October 2018 and October 2019, weekly allocated TEUs on the trade fell 8.6%, to 22,308 TEUs, as illustrated in the chart below. 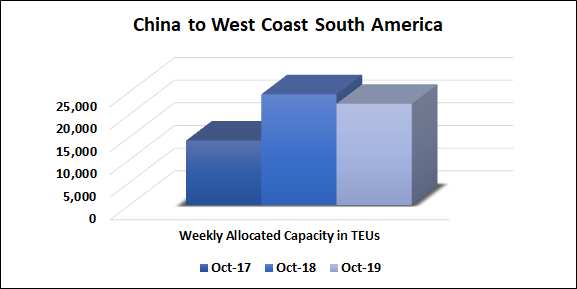 Due to the trading relationship with the second largest economy in the world, Chile has sustained impressive growth over the past couple of decades. This growth faces significant challenges in the future though with current protests targeting the Chilean transportation, mining and port industries. On Oct. 23, the Port Workers Union of Chile announced that 6,000 port workers were going to begin striking at 20 ports throughout the nation.
Strikes at Chilean ports and delays in supply chains will create inefficiencies that will hamper economic prospects.  With weekly allocated TEU capacity already dropping from China to Chile, we can expect civil unrest to further dampen TEU capacity in the future. If the strikes and rioting impact the mining industry in unison with ports, we can expect the Chilean economy to fall into a recession.
The Chilean government needs to find a solution to end the strikes and rioting before they start having significant impacts on the economy. If the riots continue into the new year, we can expect capacities to plummet and the economy to contract. If the populace is appeased in the near term, economic growth should continue in the future.
Interested in our data? Contact sales here for more information.