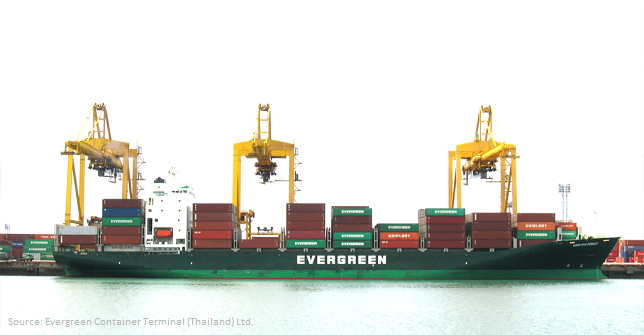 Evergreen is not likely to give up its top spot as the largest Taiwan-based ocean carrier anytime soon.
Compared to Yang Ming, the second largest Taiwan-based carrier in terms of container vessel fleet size, Evergreen is much more financially stable and also holds a substantially larger global footprint.
Evergreen and Yang Ming both saw financial improvements for the first nine months of 2019 compared to the corresponding 2018 period, as illustrated in the chart below, which was built using data from Taiwan Stock Exchange filings. However, while Evergreen recorded a net profit of NTD 103.74 million for the first 9 months of 2019, Yang Ming was still in the red with a net loss of NTD 3.08 billion. 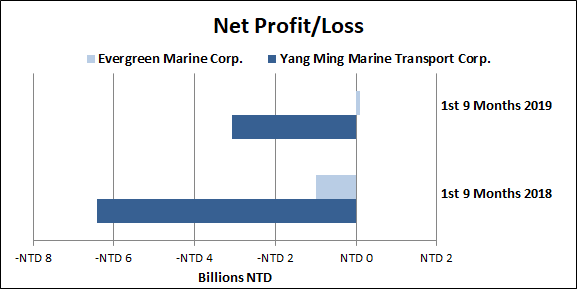 In terms of consolidated revenues for the first 9 months of 2019, Evergreen recorded more revenues than Yang Ming, and higher growth than Yang Ming compared to the corresponding 2018 period. Evergreen’s consolidated revenues for the first 9 months of 2019 stood at NTD 142.66 billion, up 18.9% year-over-year, while Yang Ming’s consolidated revenues totaled NTD 113.26 billion, up 9.6%.
Additionally, Evergreen is a member of the OCEAN Alliance, which is the largest of the three global ocean carrier alliances operating on major east-west trades. Yang Ming on the other hand is a member of THE Alliance, which is the smallest of the three major alliances. Although Hyundai Merchant Marine (HMM) is expected to begin operating as a member of THE Alliance in April 2020, HMM will likely gain more from the deal than THE Alliance members will, which BlueWater covered in its report, “HMM snags huge opportunity with THE Alliance deal.”
Alliance partnerships aside, Evergreen still has a larger global footprint than Yang Ming, as illustrated in the chart below, which was built using data from BlueWater Reporting’s Carrier/Trade Route Deployment Report. Each week, Evergreen deploys 715,237 TEUs towards trade routes across the globe, while Yang Ming only deploys 434,159 TEUs each week throughout the globe. 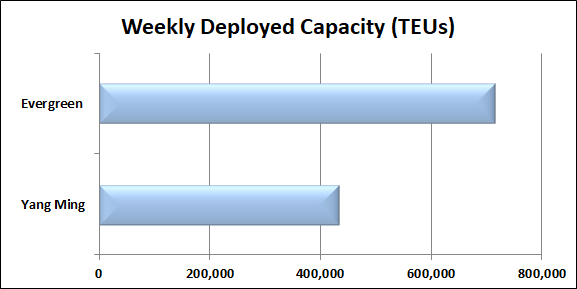