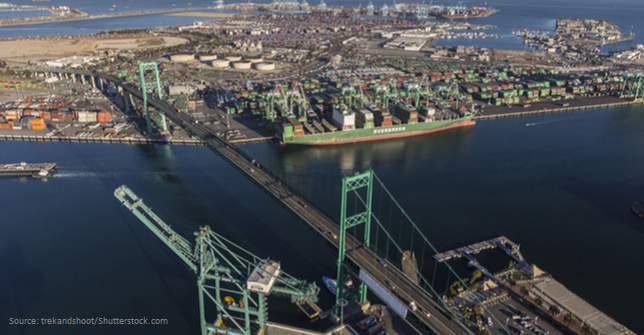 The ports of Los Angeles and Long Beach, which comprise the San Pedro Bay Port Complex, are dealing with serious headwinds from the nation’s ongoing trade war with China, as well as other factors, which has caused their overall container volumes to plummet.
In October alone, the Port of Los Angeles handled 770,189 TEUs, down 19.14% from October 2018, when the port handled 952,554 TEUs, data from the port showed. The nearby Port of Long Beach said it saw container volumes dip 2.41% year-over-year in October, falling from 705,408 TEUs last October to 688,425 TEUs this October. For the first 10 months of 2019, the Port of Los Angeles still managed to increase container volumes 1.80% year-over-year, while the Port of Long Beach saw a 5.4% decrease, according to data from the two port authorities.
Just this month, the Port of Los Angeles released a study conducted for the port by consulting firm BST Associates, which found that the Southern California ports of Los Angeles and Long Beach are uniquely exposed to tariffs because of their dependence on imports from China.
The study, dubbed, “By the Numbers: Jeopardizing the National Benefits of Trade through America’s Busiest Port Complex,” said, “Most of the imports moving through San Pedro Bay ports originate in China. China accounts for 42% of all waterborne import tonnage, including 61% of containerized import tonnage and 3% of non-containerized import tonnage.” Tonnage data in the study was gathered from the World Institute for Strategic Economic Research.
Due to this unique exposure to Chinese imports, West Coast North American ports are experiencing the brunt of the trade war. Using the BlueWater Reporting Capacity Report, we can measure the reduction in weekly allocated capacity from Asia to the West Coast of North America (U.S./Canada) on a year-over-year basis. It is important to highlight that the Asia trade region encompasses countries outside of China, although the Chinese make up most of the trade. Similarly, West Coast North America accounts for several ports, but Los Angeles and Long Beach account for most of the trade.
Between October 2016 and October 2017, weekly allocated capacity on the Asia to West Coast North America (WCNA) trade rose 7.54%, from 266,021 TEUs to 286,084 TEUs. The following year also saw an improvement, with weekly allocated capacity rising 2.71% between October 2017 and October 2018, to 293,844 TEUs. However, between October 2018 and October 2019, weekly allocated capacity on the Asia to WCNA trade fell 7.17% to 272,765 TEUs, as illustrated in the chart below, which was built using BlueWater Reporting’s Capacity Report. 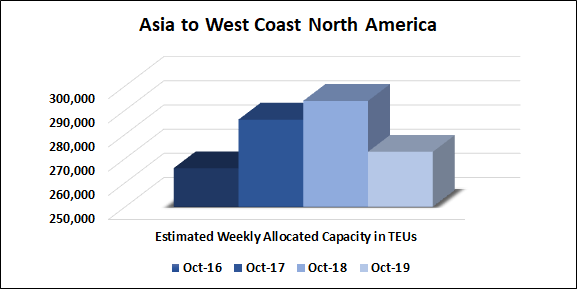 The data provided by BlueWater Reporting shows that the WCNA region is struggling, but it might not be entirely due to the trade war, as the study suggests.  Logic would postulate that capacity from Asia to all regions throughout the U.S. should be decreasing if tariffs are the sole culprit behind sluggish business at the ports of Los Angeles and Long Beach. Using the BlueWater Reporting database, we can test this hypothesis to see if other U.S. ports are experiencing the same decrease in capacity.
Between October 2016 and October 2017, weekly allocated capacity from Asia to the East & Gulf Coast of North America (U.S./Canada) increased a staggering 22.66%, from 113,368 TEUs to 139,056 TEUs. Between October 2017 and October 2018, weekly allocated capacity on the trade increased 3.43% to 143,825 TEUs, while weekly allocated capacity inched up 2.00% between October 2018 and October 2019 to 146,702 TEUs, as illustrated in the chart below, which was also built using BlueWater Reporting’s Capacity Report. 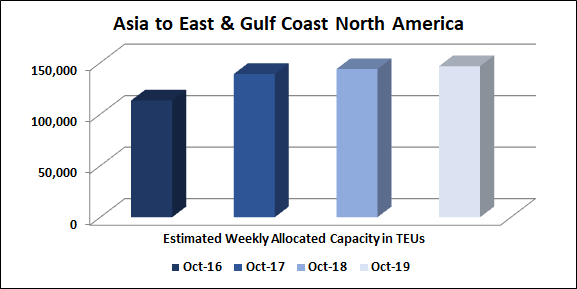 The data suggests that while the trade war is negatively impacting West Coast ports, the Gulf and East Coast ports have still been able to see an increase in allocated capacity from Asia. With the trade war having no end in sight, and ports along the U.S. East and Gulf Coast continuing to undergo upgrades and snag business in the wake of the Panama Canal expansion in June 2016, the ports of Los Angeles and Long Beach will have to devise new strategies for growth if they hope to stay competitive in the future.
Interested in our data? Contact sales here for more information.